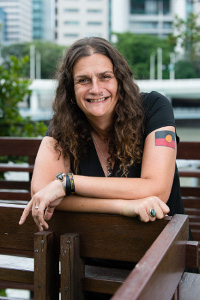 Claire G. Coleman is a Noongar woman whose family have belonged to the south coast of Western Australia since long before history started being recorded. She writes fiction, essays and poetry while (mostly) traveling around the continent now called Australia in a ragged caravan towed by an ancient troopy (the car has earned "vintage" status).

Born in Perth, away from her ancestral country she has lived most of her life in Victoria and most of that in and around Melbourne.

During an extended circuit of the continent she wrote a novel, influenced by certain experiences gained on the road. She has since won a Black&Write! Indigenous Writing Fellowship for that novel ,"Terra Nullius". Terra Nullius was published in Australia by Hachette Australia and in North America by Small Beer Press.